In the youth Brazilian Jiu Jitsu program we focus much more on developing the skills and techniques of BJJ. Discipline is also a critical component.

As a team we encourage each other to become better people...on and off the mat. We will sometimes spend time on the philosophy of the art.... which is part of strengthening the mind as the body develops

The kids program is 2-3 times a week for 45min to 1 hour each session.

The class consists of a warm up followed by exercises and drilling .The remainder of the class is learning new techniques and confirmation of the technique . 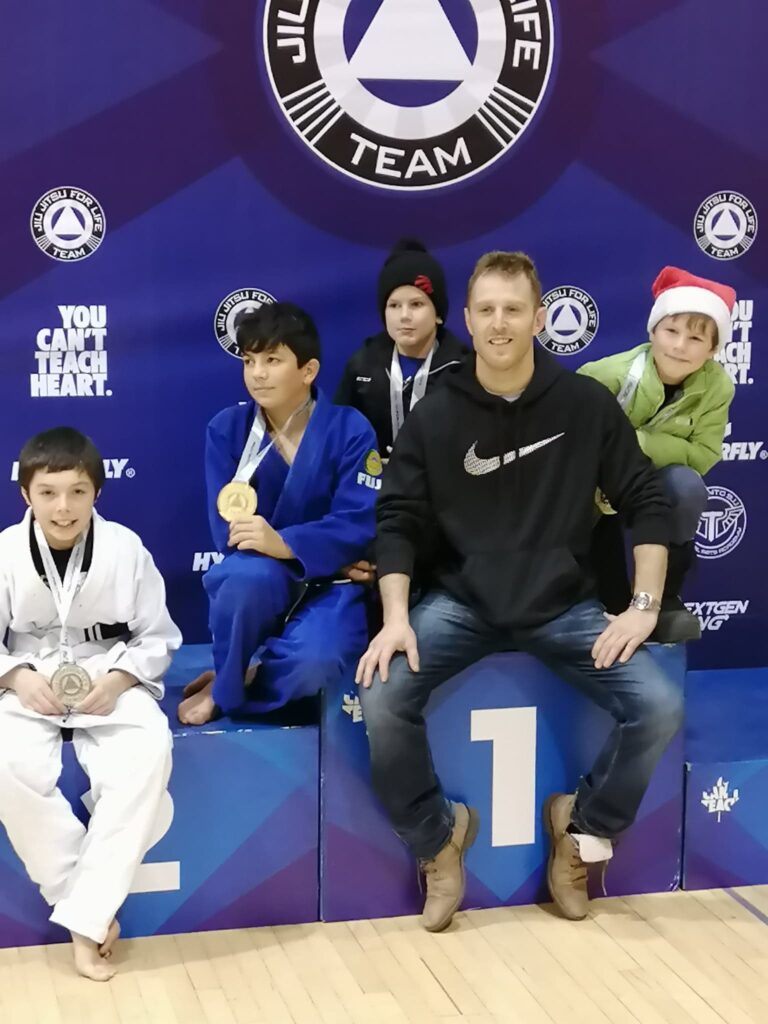 Parry Sound it's finally here! The Train Station Fight and Fitness will be offering Brazilian Jiu Jitsu and Grappling programs to the community.

The highly experienced, dedicated instructor, and excellent facility is the perfect opportunity for children and adults alike to learn this amazing martial art . Class sizes will be limited to maximize the learning process and promote safety.

Jiu Jitsu, or Brazilian Jiu Jitsu as it is commonly named outside Brazil, is a grappling orientated martial art/combat sport that evolved from its Japanese roots in 1920’s Brazil, and continued to evolve for many decades after until its present format. This style though previously established in its native country, became highly popular within the northern hemisphere after a series of performances from BJJ fighter Royce Gracie in the early UFC’s (Ultimate Fighting Championship) where he battled against competitors from many different martial arts backgrounds in the no holds barred tournament, becoming the fighting promotion’s first champion. This event proved Jiu Jitsu’s efficiency and helped raise awareness all around the world, becoming one of the reasons behind the sport’s growth (but not the only one).

You will be asked to enter through the plaza doors and go down the stairs and wait. Each student will be taken into the class and attendance taken. Classes will start on time and end on time.Please respect peoples in the waiting area outside the doors. No spectators**Exception for parent coaches

Individual cubbies will be used during class times to store and  keep each students belongings separate.

Enter the main lobby at street entrance and go down the stairs. Wait
at the door and your child will be greeted and attendance taken.

Arrive Early or on time. Please respect peoples space. No kid under the
age of 14 will be leaving the building without guardian in the waiting area.Please follow local public health guidelines when in a public setting.

is grappling with the use of a traditional Gi, which allows you to grab the clothing of your opponent.

is grappling without the traditional uniform, instead you wear shorts and a rash guard. In no gi you cannot grab your opponent's clothing.

To be a complete BJJ player, you should train in both. Marcelo Garcia is a good example of a BJJ player that is world class in both. He only started No Gi at brown belt, having built a strong base in Gi Jiu-Jitsu first. Usually if you start training in majority without the Gi, then you will have a much harder time adapting to the Gi. The Gi in some ways is more complex with all the grips but No Gi has many other aspects which are not found in the Gi (for ex: more brabo chokes, guillotines, footlocks than in the Gi).

Here are the main differences:

In Gi, you will of course wear a BJJ Gi. In No Gi, you wear shorts and a T-shirt or rash guard.

The Gi has a huge amounts of grips on both the jacket and pants. The most common jacket grip is the collar/sleeve grip. The grips allow you to have great control on the fight and to submit your opponent using their or your own Gi. It allows a much smaller opponent to control a bigger one. In No Gi you have more wrestling based grips such as neck, and grabbing all joints in the body. It is harder to control an opponent and can slip or power out of controls.

No Gi i BJJ is faster paced. Gi slows things down due to the natural friction of the garment.

While and Gi and No Gi are very similar, the way both styles evolve are very different. In Gi, the numerous grips and Gi material mean that alot of set ups are based on using the Gi matrerial for ex: lapel or worm guard (which is impossible in No Gi). In No Gi, you look more at taking your opponent’s back because mounting in No Gi has limited submisions, and the back position has the rear naked choke and other options. You will find No Gi players using more guillotines and brabo/darce chokes as well as using more foot locks.

It is hard to say what is more technical as both styles are different and you also have much smaller No Gi players that submit bigger ones (taking the back is a great way of doing that).